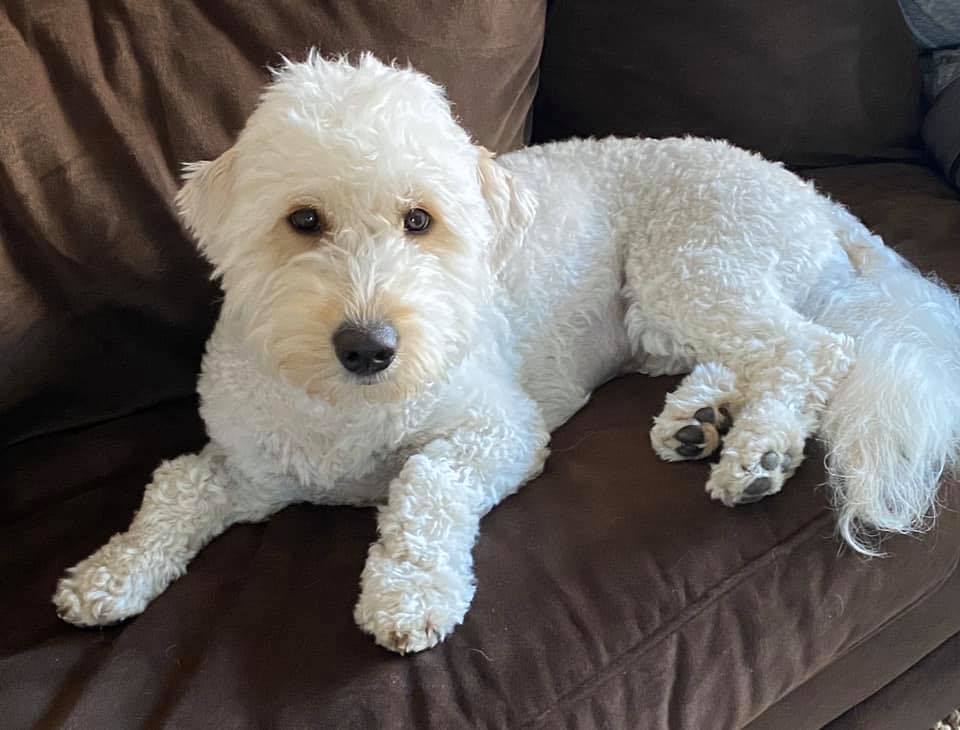 Something happened to me last month. I fell in love, with a dog. Not just any dog, a kind of funny looking rescue dog. I know, I am a dog person; so falling in love with a rescue dog shouldn’t seem unusual. But this love affair started just a few weeks after the loss of my dear Archie, my soul mate dog. I wasn’t looking to fall in love, but you never know what God has in store for you.

It was our first Doodle Romp since Archie had died and we were not sure about going. But our Doodle friends had been so wonderful with their support during Archie’s sickness and passing, we had to go. We had to let Lola see her friends and have some fun.

When Irene’s (then Dixie’s) foster parents showed up at our lunch before the romp, I realized they were there for us. Our friends are directors for the Doodle Rescue Collective (DRC) and I knew there was a mini doodle coming up for adoption. When I first approached the little dog, she was nervous and not ready to meet new people. So, I waited awhile and tried again. I sat on the ground and she warmed up to me. I started talking to her foster parents about her past, and was heart broken that she had had such a rough start. Then, I picked her up and held her in my lap. She curled her head around my neck like our cockapoo Annabelle used to and I was gone. It took a whole second of snuggles and a piece of my heart forever belonged to this little scamp of a dog.

Kevin wasn’t feeling good that day and his grief over the loss of Archie was still heavy on his heart. He didn’t hear Irene’s story, he didn’t snuggle her, and he barely petted her. He just wasn’t feeling it. Not to mention, we had a deposit on a puppy due the end of February. Basically, he thought I was nuts.

I understood his concerns. Our number one priority was getting his heart back to normal rhythm. We couldn’t make any decisions until he was better. We were blessed and his cardio version worked; and that piece of my heart still belonged to Irene.

The DRC is a wonderful rescue organization and we are honored that we passed the application process. I had worn Kevin down to at least letting us officially apply. There were several applications for Irene and we offered to do another meet and greet. Kevin was finally onboard with meeting with the foster parents and the puppy again. She had been spayed during our time getting Kevin’s heart better and she was ready to be adopted.

Last Saturday, the day after Irene turned one-year-old, her wonderful foster parents came to our house and spent two hours letting Irene get to know us and Lola. It didn’t start out well. Our sweet Lola, who hasn’t a mean bone in her body, didn’t like Irene at first. As a matter of fact, she was awful to her. Irene was stressed and I started to wonder if we WERE the right family for her. I can’t say how much I appreciate the patience Irene’s foster parents gave her and us! They worked with Irene and Lola and gave us tips on how to handle Irene’s behaviors. By the time they left, both dogs were calmer and tolerating each other.  And Kevin was just as much in love as I was. The foster parents just wanted one more assurance we were the right family. They knew we went to the Doodle Romp every month and they wanted to see how Irene did in that environment.

Let’s just say, Irene is a natural at Doodle Romps. She played and never stopped!! By the end of the romp, our adoption was official!! We signed the contract Sunday and brought her home Monday.

From the moment she came in our door, Irene has been HOME. As I write this, Lola and Irene are lying next to each other sleeping at my feet. Kevin is convinced that I am some kind of dog guru. I know-I just followed my heart.